February 20, 2018
Having spent the better part of this millennium until recently in St. Louis I grew to become an avid follower of the Cardinals.  Time spent at the current Busch Stadium and its predecessor was a slice of baseball heaven.

St. Louis has arguably one of the best fan bases in all of the major leagues, attracting upwards of 3.5 million in annual attendance, good for second in overall turnstile counts the last three years in a metropolitan market that ranks 19th in population.  Beyond numbers, though, Cardinals followers are a highly baseball-educated fan base.  Among those in the crowd, it is not uncommon to observe as many as three generations of family members in attendance, 80 year old ladies keeping score, and intelligent conversations about lefty-righty batting-pitching matchups.

A great appreciation of St. Louis baseball history exists.  From Dizzy Dean to Stan Musial, from Lou Brock to Ozzie Smith; from Budweiser Beer to Clydesdales; from Harry Caray to Jack Buck, the roots run deep.

Most fans of my generation and older still speak of a magical individual season 50 years ago when one individual performed so sensationally that the rules were altered the next year partly due to his prowess.  Omaha native and right-handed pitcher Bob Gibson was 32 in 1968 and in his 10th season with the Cardinals.  He opened the year in rather unspectacular fashion enjoying three wins vs. five losses in his initial eight decisions.  Cardinal fans, however, still recall and can recite the final numbers:  22 wins, 9 losses, an earned run average of 1.12, 28 games completed out of 34 starts, 13 shutouts.

Put that season in the perspective of the modern game.  Granted baseball has changed due to an infusion of offense.  However, in 2017 the most wins by a pitcher was 18.  The lowest earned run average was 2.25, a full run and then some above Gibson’s mark.  The most complete games was 5 and 3 shutouts led all of baseball.

Bob Gibson was an intense competitor, feared by opponents and even somewhat his teammates.  His long-time catcher, Tim McCarver, recalls those rare instances that Gibson would find himself in a jam.  McCarver would visit the mound to “settle him down.”  Often those visits were met with a glare followed by, “McCarver get back to your place and do your job (or a choice of more colorful verbiage to that effect).”

Many Hall of Famers of that area flailed against Gibson:  Willie Mays, Hank Aaron, and Roberto Clemente among them.  Yet, lesser known players such as Billy Williams of the Cubs and Richie Hebner of the Pirates enjoyed some degree of success.

What must it have been like to face the Gibson’s, the Koufax’s, the Marichal’s the Seaver’s, and other great pitchers of their time, especially knowing the likelihood of failing four out of every five times?  And what parallels does it have today in our careers, health, and relationships?

Remember that first audition for a musical?  Your initial talk or presentation you gave?  An unexpected confrontation with a co-worker?  Palms were sweaty, heart pounding rapidly, throat tightening.  The inclination may have been for flight as in “God get me out of here.”  Yet you stood in, most importantly survived the experience, perhaps had some level of success, and were better prepared for the same or similar situation the next time around.

Williams and Hebner figured out something about Gibson that made even the invincible appear just a little more human.  Maybe it was approaching the “at bat” with a “nothing left to lose” viewpoint.  There was likely an element of patience involved of “waiting for the right pitch.”  It could have been merely the baseball fundamental of making solid contact with the ball.

David had his Goliath, the youngster equipped with just a few stones and slingshot.  Besides his life he had little else to forfeit as expectations for his success were low.  He had been patient and waited for the right time and moment.  He made solid contact.

Though I’m not promoting the notion of walking into danger, I would observe from experience that the best antidote to facing the giants in your life is to meet them head on.  Consider your strengths and abilities.  Take into account the vulnerabilities and weaknesses of that which you’re confronting.  Maintain perspective and know that a more important battle may be in the offing.

Bob Gibson was one of the finest ballplayers of my lifetime.  And, as we move towards another season of baseball with Spring Training now in full mode, a parallel to the American Pastime felt right, not to denigrate Mr. Gibson, but rather to illustrate that any of us can have our moment. 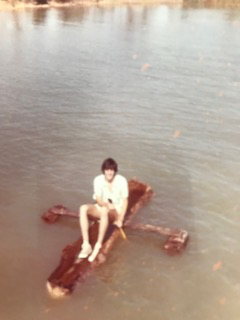 March 13, 2018
“Your talent is God’s gift to you.   What you do with it is your gift back to God.”   Leo Buscaglia Nearly a century ago, in 1920, he cracked 54 home runs, more than all but one other major league team!   The runner up that year, George Sisler, had just over a third of that number at 19 round trippers. He went on to hit a career total of 714, a record that held until 1974.   So prolific a ballplayer was he that a candy bar carried his namesake.   Whether it be the “Sultan of Swat,” “Colossus of Clout,” or “King of Crash” many would concur that George Herman “Babe” Ruth was the most dominating player to have ever graced America’s professional baseball diamonds.   What was it about Ruth that distinguished him from his contemporaries and still to this day holds him in the highest esteem? Two research professors at Columbia University made it a mission to find out.   Following a game in 1921, Babe Ruth was shepherded out of Yankee Stadium and into the research lab for a ba
Read more